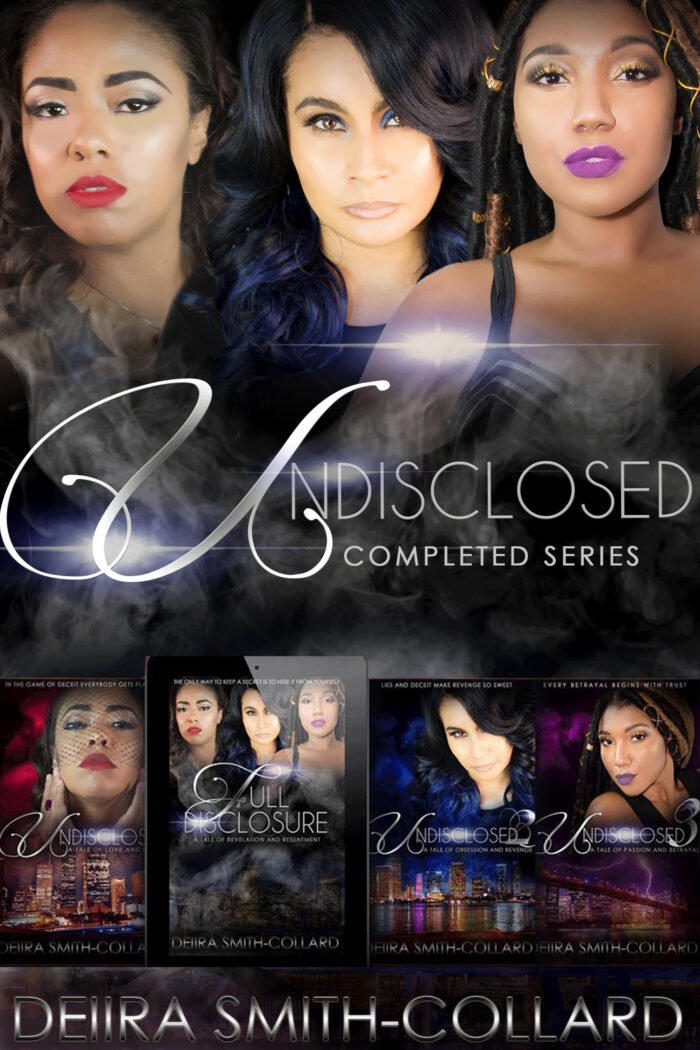 1: Undisclosed: A Tale of Love and Deceit

What happens when the past collides with the present? Kyra escaped New Orleans burning bridges and harboring secrets. Determined to create her perfect life she finds her dream man. And now she lives a life of comfort and convenience as the wife of a high powered Texas attorney. But Kyra’s perfect life gets turned upside down when her web of lies and deceit return in the form of Redd. He heads to Houston ready to shatter Kyra’s life created with smoke and mirrors to get his life and enterprise back on track and take back what’s rightfully his. There’s just one problem: their undeniable attraction.

Kyra soon finds she’s falling again for the smooth talking hustler she was determined to leave behind. Redd, not impressed by her luxury cars or mansion is prepared to conquer and destroy by any means necessary. Her carefully orchestrated reality is unraveling fast. How far is Kyra willing to go to protect her secrets?

2: Undisclosed 2: A Tale of Obsession and Revenge

How far is too far in the name of love? When Khari makes the ultimate sacrifice for her mother and sister, she finds herself in the clutches of a savage. Dro, a merciless king of the streets, first sees her as a possession but soon finds the only thing he wants to possess is her heart.

Together they build an empire of desire and seduction, trading and selling men their ultimate fantasies. But what happens when those sweet dreams turn into vicious nightmares? An unlikely enemy emerges determined to take what he wants, setting his sights on their territory. But when Dro disappears Khari is caught in the crosshairs, she is left with one choice: Find the threat and seek revenge.

Khari was taught by the best, handle your enemies by any means necessary and they’ll soon learn beside every savage is a boss b*tch.

3: Undisclosed 3: A Tale of Obsession and Revenge

For there to be betrayal there must first be trust. Amina Viera is a woman trapped between two worlds. Rocked by the loss of her father, her one and only mission is to bring down those responsible. In the name of justice, Amina weaves together a maze of sex, lies and deceit, getting her closer to her goal but deeper in the game. And the only thing she has to lose is herself.

Lost in the world of money, drugs and murder, Amina’s deep cover lands her in the middle of the largest drug cartel in the South. Between being tortured to kidnapped, Amina’s double life is catching up to her fast.  Amina’s on the run and out of options. It’s either kill or be killed. But when past lovers become enemies, and former adversaries become allies, there’s only one problem, who can she trust?

4: Full Disclosure: A Tale of Revelation and Resentment

Sometimes the end is just the beginning …Caught in a bitter fight for survival and barely escaping arrest, the members of the Third Coast Cartel are trapped in a game of cat and mouse. Under a watchful eye, Dominique has to walk a fine line and prove her worth to the organization. Seeing Khari as a threat, she will stop at nothing to make sure that she is the one that ends up on top. Khari’s quick-witted street smarts has kept her one step ahead of everyone else and landed her favor in the organization, but will the cost of being a boss be at the expense of her life?

With the FBI still hot on their heels, and Amina revealing their inner workings, they must find a way to put the crumbling pieces of their organization back together. Will the family come together to rebuild everything, or will the deceit and mistrust be their downfall?

There are no reviews yet.

This was a great book with lots of twists and turns to keep you guessing til the very unexpected ending! I will definitely read this author again!

So many twists. Great read! Definitely didn't want the novel to end. A definite must read hood tale with an unpredictable ending!

I was so pleased with this book because I tried to read another book by this author and hated it! I almost didn't read this when I saw who had written it. But this book is intriguing, full of twists and I was captivated from the first paragraph. I love how the twists sneak up on you and you're like "wait, what?" I loved the writer's style, intertwining the past with the present. The metaphors, the descriptions all put you right there in the book. One star was lost for errors, but this was a great read. Definitely reading part 2.